Recovered trauma patient thanks caregivers who saved his life

Gauthier, a 54-year-old Navy pilot and Air Force retiree from the Panhandle was in Parrish, FL, visiting family when he was severely injured in a traffic crash on March 1st, 2020. He was unresponsive at the scene and suffered severe injuries including, head trauma and crushed bones. He was flown from the accident to the Trauma Center at Blake Medical Center. “When he arrived, he was gravely ill with less than 5% expected survival.” said Dr. Erwin Rusli, trauma surgeon, “It’s incredible to see him so transformed now. It gets me choked up. We rarely get to see patients once they have recovered. It reminds me why I went into medicine.”

Gauthier was a patient in the ICU for almost two months. “Really, it’s a miracle. They say when I arrived I barely had a pulse, and at one point in my recovery, my heart stopped beating for 7 or 8 minutes." said Gauthier, "It would have been easy to feel that I wasn’t going to make it and stop, and they didn't. I was touch-and-go for a long time, and they kept fighting.”

Because of visitor restrictions in place during Steven’s hospitalization due to COVID-19, his family was not able to go into the ICU and see him. The trauma team at Blake Medical Center became a surrogate family for Gauthier and his family, communicating with his wife frequently and offering encouragement and comfort as they worked to save Steven's life.

Gauthier was in a coma for much of his stay at Blake Medical Center. He says for him the reunion is an important step in his healing process. “They never gave up on me. It’s because of these people that I am alive today, and I am very grateful for all they have done for me.” 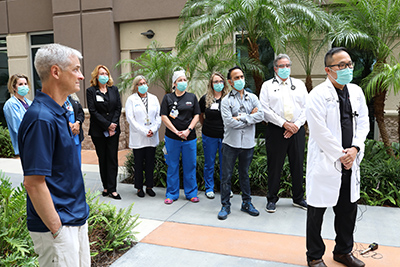 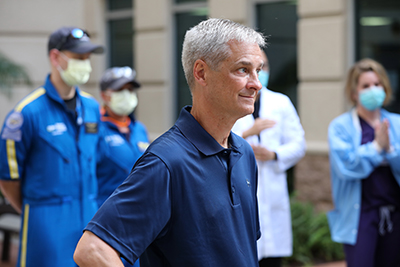